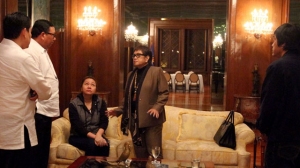 Lawyer Lorna K’s plea for AMLC’s­ (Anti-Money Laundering Council) freeze order to be tempered with justice seems hollow and puny. She was upset that the  agency froze not only her client’s various accounts but accounts of the children and their ATMs as well.  She expressed fear that the children cannot go to school and could starve because of the “freeze.”

Are not these children’s money provided by the mother who is now in custody for trying to silence a relative who exposed her for allegedly defrauding the government of huge pork barrel funds?

In an attempt to turn the table around, she  comes swinging at AMLC and demanded from the agency to freeze also the accounts of the lawmakers involved in this PDAF scam and the accounts of other NGOs.

Big law firms which represented jurist Renato Corona at his impeachment trial last year were of the opinion that a freeze order of bank accounts can be done by AMLC only if there is a ‘predicate crime’ – meaning a case was filed in court already and the subsequent freeze was issued on application by AMLC to freeze the accounts of those charged in court.  Personally, I am of different view.   AMLC can freeze the accounts of depositors on suspicion that their deposits were  proceeds of a crime, absent of a  pending case notwithstanding — but my position is  irrelevant here. 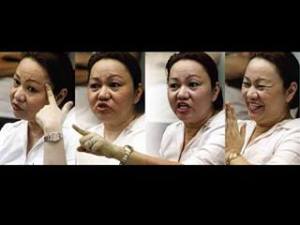 Janet  Napoles has been charged with “serious illegal detention” of cousin-whistleblower Ben Hur Luy  who said that  she was behind the multi-billion PDAF scam.  Tangentially, her right to her “fortunes” had been assailed in this case, which gave  AMLC the right to apply for a freeze order before the Court of Appeals.

There was no pending case yet against the corrupt lawmakers  —  directly or tangentially.  Thus AMLC for lack of legal basis, has to tarry.  But Lorna K had to blame the AMLC for double standard and selective and vindictive application of its authority.  She seems to take the view that even in the absence of a court case, AMLC can already freeze the accounts of the legislators involved in the PDAF scam.

All of a sudden Lorna K becomes a mother worried about  starving children and their being unable to go to school because their ATMs had been included in the AMLC’s freeze order.  But was she worried about those children already starving and out of school because money earmarked for social services and livelihood projects had been reportedly siphoned off as personal fortunes of her client?  Or must these unfortunate children’s mothers must be her clients first before she can empathize with them?

Lorna K belongs to a firm that seems to specialize in high profile clients.  Would it not be a welcome sight seeing her taking the cudgels for the oppressed and the downtrodden?  Or her talents beyond the reach of these less privileged people?

Lorna K, incidentally,  was a batchmate in college and a classmate in a couple of subjects about 34 years ago today.  Her legal stars were not as bright compared to more diligent students in class, the likes of a Ting Halaguena, Mae Galvez, Gina Padilla or Cecilia Malapit.   These  class stellars one way or another were employed by ACCRA, which according to author Ricardo Manapat, (Some Are Smarter Than Others) is a highly paid ‘influence peddler’ just like PECABAR.  Their services were engaged more for their connections in  the powers that control  the corridors of government than for  the battery of brilliant lawyers in their stables.

Lorna K  teamed up with with ROBOKAP, another big law firm of the late Senator Raul S. Roco, and on occasion of which she had professional connection with another lawyer of the firm, Edwin Lacierda, the Malacanang Palace spokesman  who was only too willing to arrange Napoles an audience with the President.

Big law firms however, are anathema in a society where 85 percent are poor.  These big law firms service about 15 per cent of the population, the super rich, while the poor and middle class were serviced by smaller law firms.  The uglier reality is that moneyed people enjoy the talents of hotshot lawyers, but the poor man caught up snatching a cheap wristwatch along Carriedo is represented by PAO lawyers or become a virtual guinea pig of senior law students doing their OJT in court.

Lorna K,  known then for her maiden name, Lorna Patajo, vivacious, friendly and easy-going, was a classmate in trial practice, a 2-unit subject in college.  Even in those days, Lorna K exhibits sheer fascination of lawyering for those who had ‘brushed with the law’, though this one was only a pretended criminal.  She lawyered for a man who seduced a nun.  The moot court has a two-judge panel, I acted as one and Felixberto Olalia,  Jr.  (now a Manila RTC Judge) was my colleague in the ‘bench.’  I have no recollections of the name of our class prosecutors.

The ‘victim’ was a coed from Maryknoll, now Miriam college, along Katipunan Avenue who according to the script was a nun seduced by Lorna’s client.  As to who wrote the script of this “crime” scenario, Felixberto and I won’t know.  But Lorna,  once this ‘nun’ was through with her direct testimony  started tearing her apart by  the incongruous way she appeared in ‘court’ with jewelries, well-coiffed and manicured despite her vow of poverty and simplicity.  The poor coed was there perhaps not as a seduced nun,  but for a possible fling with dashing male law student  and she looked very decent.

School year ends  without us delivering our opinion whether Lorna K’s client was guilty!  A mirror  of another reality that a court case lasts for eternity.  But our objective in that class was for students to apply their book knowledge of procedure to real-time ‘court scene’ on how to conduct both direct and cross examination and on how to rule on objections.

In college, coeds were members of Portia Sorority.  This elite female group, unlike WILOCI, was inspired by Portia, a  character in Shakespeare’s play “ The Merchant of Venice,” where as a lay person she had disguised “he” was a lawyer and successfully defended in court the honest merchant Antonio from the disreputable money lender Shylock who demanded that instead of ducats, he be paid a pound of flesh in accord with the ‘contractual bond’ the debtor signed with the lender.

I have no knowledge that Lorna K was a Portian.  Is this the reason why she won’t lawyer for  the righteous?  Or her lawyering for Ms. Napoles serves that lofty constitutional concept that unless proven otherwise, her client is innocent?  Lorna K is a part of that institutional complex that processes first before it judges – the only irony is that those people who undergo the same process as her client who were not as rich, cannot avail of Lorna K’s zealous representation.

Which brings us into another legal conumdrum.  Is the lawyer’s fee for her services subject of another freeze order from AMLC under the theory that it belongs to the collective treasure purloined from the treasury?

Footnote:  The 1978 UP College of law batch has an ironic twist in it.  Lorna married classmate Ed Rodin Kapunan, (who become a Pampanga RTC judge and later as Manila RTC judge, deceased). Felixberto Olalia, Jr.  is an incumbent judge in Manila.  Eduardo ‘Red’ Kapunan, Ed Rodin’s brother together with Greg Honasan, Tito Legaspi, Rex Robles and other minor personalities were implicated in the murder of Felixberto’s brother, Kilusang Mayo UNO leader Rolando Olalia and his driver, Leonor Alay-ay  in 1986.