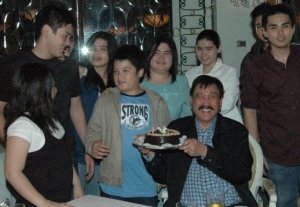 The killing of Ramon Bautista, aka, Ramgen  by hired killers under the employ  of his younger brother and sister, Ramon Joseph and Ramona Revilla have been so heavily annotated by the mainstream media that are more interested in tawdry and salacious angle of the incident than ferreting out the truth; and  a defense lawyer getting his one minute of exposure to fame rather than be an instrument to serve the interest of justice.

This is about a  “contract” murder allegedly hatched by brother and sister against their elder brother.  The media should focus on the evidence and the best source of these are the witnesses, who claimed they were there when it happened and those who saw the suspects,  left the crime scene  immediately after the murder and not on kibitzers like Genelyn Magsaysay, the mother, Dennis Manzanal, defense lawyer, and Senator Bong Revilla, the half brother of the victim and the suspects, and lately the grandmother of the victim and the suspects.

These personalities were never at the  crime scene, during the incident, nor immediately thereafter.  They can becloud the issues and spin the incident to suit their personal evaluation of what the truth is.

The media should have focused only on the bulletin being issued by police Task Force Ramgen, and not to look for background stories to spice up the police investigation.

The media’s unrelenting annotation of this modern-day equivalent of the biblical sibling rivalry between Cain and Abel is bound to becloud the issues and confuse the hearers and readers riveted to this felony spiced with cinematic twist — after all, the participants in this drama are scions of a legendary movie actor who once played, Nardong Putik, another legendary hoodlum in Cavite during the 60s.

Initially, Senator Revilla urged the police to get to the bottom of the murder instead of jumping the gun at his half-brother and half-sister, as the culprits, while the mother of both the victim and his alleged masterminds, Ms. Magsaysay, asserted that she brought up her children in the best tradition of a Filipino family and it was incredulous  to accuse them of the death of her eldest  son Ramgen over the issue of money.

Both reacted with understandable familial subjectivity that is far from the raw evidence gathered so far by the police.  The mother obviously did not have the correct handle of the capacity of her children for what she thought was an unimaginable misdeed – while Bong Revilla’s initial sound bites were instinctive reaction of a politician to stanch the damage of a public perception of how  dysfunctional a Revilla family is.  He has to switch position after  Ramona took off and bought a one way connecting flight from Hongkong to Turkey; and the bereaved mother expressed disappointment over the failure of the Senator to use his clout to protect his half-siblings.  In her Facebook, she took potshots at the Revillas for  starving the “other family”, and was  annoyed by the appendage “parasite” obviously hurled by the Revilla clan over her being dependent too much on Don Ramon’s largesse.

The Senator,  for reason of justified outrage or image build up, had accused Ramona of complicity in the murder of her brother by her surreptitious flight outside the country. For whatever motivation, his action was put in good measure, because it was a search for the truth, though how ugly that truth might be.

Not to be outdone was the lawyer who was angered by the arrest of his client, Ramon Joseph without a warrant and irritated by the innuendo that his other client, Ramona was involved in the crime and was hiding.  Of course, his comment over a sloppy police work fell flat right on his face when his client took off  and booked a flight to a nation in which our  country has no extradition treaty.  It was possible also that he was actually buffering the escape of his client by telling the police to secure a warrant first before arresting his client who was buying a ticket for her freedom.  Either way, the lawyer was instrumental in the escape of a suspect.  The right against arrest and seizure without a warrant is the general rule but there are well-defined exceptions to the rule, one of which is where the  police have verifiable good faith evidence that the person was involved in a crime even if the crime was not committed in their presence.  The police had already taken the testimonies of the killer who fingered her as one of the masterminds therefore the authorities have the right to  put manacle to their suspect the way they have put manacle to Ramon Joseph even without a warrant.  She was a suspect and the lawyer could have surrendered her to the police if indeed she was not guilty, rather than trash-talk the police for railroading the case against his clients.  Besides, a court action for arbitrary arrest is available to the lawyer and his clients if the arrest turns out to be frivolous.

In another corner, we hear the the whining of a mother to the specter of a dead son, who could not sacrifice two more from the same loin rotting in jail – and the prospect of herself infront of a mirror with those images haunting her —  grisly reminders of her failure as a mother. So she has to invent a lie that she has raised her kids in a Christian faith abundant in love and not in an environment of hatred and contempt.

In her tattered sense of morality, she asked for public sympathy by adroitly playing the card that they were neglected by the Revilla patriarch whose monthly allowance for the kids was only P300,000.00 and that she was in fact heavy with debts.  Was  it her lament in her Facebook prior to the murder of  her son about her being depressed over money matter that actually triggered her kids to undertake a desperate measure to address it?  And listen to her meanderings about their deprivation — with monthly  allowance of P300,000.00; flashy cars, inordinate household in a gated subdivision as backgrounds.  Many Filipino mothers would salivate with envy over her situation prior to the murder of her son, than be upset of her obvious fortune.

Anyways, one can can see how turbulent the turn of events could be if everyone is interviewed by the media instead of allowing the police  a free rein in the investigation and to talk to them only about the progress of the investigation.

Ms. Magsaysay owes it to the public as well as her dead son not to muddle the issue and help them search for the truth.  She should not change the topic and engage the public about her misery and the shabby treatment she got from the Revilla family at the other side of the social spectrum.   And from her looks, she is far from being starved.

We owe the living, Ms. Magsaysay our respect, or even  our sympathy for her misfortune, according to Voltaire, but the dead, the truth!