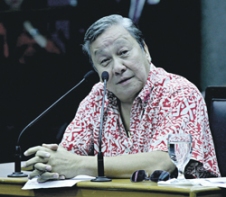 The Lord always works in some mysterious ways.  Who would ever think that a very innocuous corporation set up in 1961 as Basa-Guidote Enterprises, Inc., (BGEI) one owner of which,  now a 90 year old nun, would come to haunt the Chief Justice in 2012?

This tale started in early 1990, when Mrs. Corona was accused by her relatives of misappropriating the funds of BGEI.  Mrs. Corona sued her relatives for libel which resulted to conviction of three of her relatives. This family feud was known to the Chief Justice.

From then on, Mrs. Corona appeared to be in control of the BGEI despite protestations from the other stockholders.

In 2001 Mrs. Cristina Corona, aided by her husband,  the embattled Chief Justice sold the 1,020 square meters property owned by BGEI, the only property worthy of note of the corporation located at Bustillos Street cor. Legarda Street, Manila for P34.7 million in favor of the city.  I said “aided” by the Chief Justice because he had accompanied his wife to the office of then Mayor, Lito Atienza whose secretary, Atty. Emmanuel R. Sison happened to be the classmate in Ateneo by the jurist. He also signed the deed of sale between the parties as a witness.

The negotiation started in 2000, and the sale was finally consummated in 2001.  After the sale was executed, the city treasurer processed the check in the amount of P34.7 Million in one day, June 5, 2001, despite the fact that the check requires 3 initials of  three city officials aside from the signatures of the Mayor and the City Treasurer.  The check was deposited on the same day, June 5, 2001 at Land Bank, located inside Malacanang Palace.  The palace is where Corona worked as chief of staff of the newly-installed president, Gloria Macapagal Arroyo.

The Coronas were in a hurry and they knew how to work the system.

The payee of the P34.7 Million was Mrs. Corona, ITF BGEI.  Mayor Atienza explained that ‘ITF’ means ‘In-Trust for’ BGEI, the corporation, as an added security to ensure that the check goes to the right party.  What happened was the opposite of what he had wished for because the payment turned up into the personal bank account of Mrs. Corona instead of the account of the BGEI.  By some clever manipulation later, the money turned up in three (3) personal accounts of CJ Corona at PSBank, Katipunan Branch which were closed on December 12, 2011, the day the Chief Justice was impeached by the House of Representatives.

Oh, boy, the plot is getting thicker!

During the impeachment trial on March 22, the following came up:

In 1999, the City of Manila needed a relocation site for its market vendors that will be displaced because of the construction of LRT II along Sampaloc. The BGEI property across the existing market that would be demolished was found to be an ideal relocation site.  Mayor Atienza instructed his city administrator to look for the owner/s of the property.  The city found Mrs. Corona in 2000 who represented that she was the authorized representative of the BGEI.

The City of Manila which was paid P150 million for the old market by the LRTA – negotiated the purchased  of the BGEI property for P34.7 million, after almost a year of hiatus because the owners did not want to sell the property at P25 million, the amount originally offered by the city.  The parties finally closed the deal in 2001 because according to Atienza, the city would be forced to expropriate it and the Coronas would rather settle at P34.7 million. There is something here that does not add up.  If the city threatened to expropriate the property, it should have been able to acquire it at a lesser price instead of more.

Not wanting to be perceived as an overeager negotiator who offered the price of P25 million only to close the deal at P34.7 million, the Mayor had described it more succintly: “the city sells its properties at prime prices but would buy private properties at rock bottom prices.”  Obviously, he was referring to the sale of its old market at P150 million only to buy a replacement property for P34.7 million.

As earlier adverted to, the city prepared the check of P34.7 million which requires 3 initials of city officials and signatures of the Mayor and the City Treasurer in one day. You can get a sense too that the very reason the transaction between Mrs. Corona and the City of Manila was fast tracked in a lightning speed because the mayor wanted to relocate the Sampaloc market vendors anxious and agitated of the prospect of being ejected from the old market without an alternative market and not because the city was dealing with the wife of a Malacanang Presidential chief of staff who happened to be the classmate of his secretary.

Inasmuch as the city was dealing with a wife of one who was high-up in the bureaucracy, ordinary caution was thrown to the wind.  A simple diligence of verifying who the real property owners are or the stockholders of the corporation was never done.  The city relied on a 14-year old  authority of Mrs. Corona to deal with the property on a transaction that requires specific authority to sell because it pertains to a real property.   A certification of the corporate secretary, Asuncion Basa who happened to be the mother of Cristina Corona that she was the representative authorized to conduct the sale was legally insufficient.

For this reason or others, like failure of the city to submit an appraisal of the property before agreeing on the price of P34.7 Million was concern enough to the commission on audit to object to the sale so that up to this time the title of the property has not been transferred yet to the city government despite the lapse of a decade.

That had the city done its job carefully, it would also find that Mrs. Corona was no longer authorized by the corporation as early as July 1995 to represent the corporation.  (Please see the ad in the Bulletin Today in 1995).

Though the IC considers this issue collateral, it is central however,  in the appreciation of the moral make-up of the Chief Justice who made rounds in various media outlets disclaiming any interest in the property of the corporation of his wife only to be confronted with embarrassing facts that came up in the impeachment trial that he was very much part of the negotiation of the sale of the BGEI property and even signed the contract as a witness;  one of the negotiators, Atty. Sison, the secretary of the mayor was his classmate; and the proceeds of the sale ended up in Renato Corona’s PSbank accounts.

As to who authorized the loan/cash advance to him was as surprising as how the substantial amount of the 2001 purchase price of the Bustillos-Legarda property turned up in his bank accounts.   These facts show that he was so much engrossed with the corporation of his wife contrary  to what he wants the  public to believe that he had kept a respectable distance from it.

Clearly, the corporation was disenfranchised by the SEC in 2003 therefore the only thing the corporation can do was to liquidate its assets and distribute them to the stockholders.  But lo and behold, the money of the corporation was with Chief Justice Corona up to year 2011 despite the company being non-operational as of year 2003.

Incidentally, the total amount the Chief Justice or his spokesman had claimed to be the funds of the BGEI  which was withdrawn from PSBank amounted only to P32.6 Million or there was a shortage of P2.1 Million from the purchase price of P34.7 Million.

Was this P2.1 Million purloined as a transactional commission to whoever was responsible in making the offer from P25 Million to P34.7 Million and to those who caused the payment to be processed without  bureaucratic red tape?

Processing the P34.7 Million in one day and depositing it on the same day is one for Ripley’s Believe It Or Not!

Chief Justice Corona has a lot of contrition to do this Lent!  I hope the good lord keeps him away from an institution that needs serious house cleaning.  He can resign now to save this nation from too much political bloodletting!

20 thoughts on “﻿﻿﻿CJ Corona Has A Lot of Contrition To Do This Lent!”