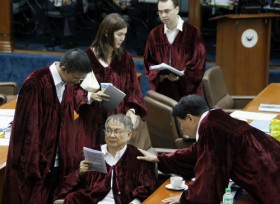 CJ Renato Corona remains confident, at times, combative, despite seemingly overwhelming evidence about his character not befitting that of the jurist of the Supreme Court. The reason — he and his lawyers are Marxists, who believe in their own lies!

CJ Corona has no moral and religious philosophies. To him, these lofty ideals are “phantoms formed in the human brains.”  Marx.

His going around various media outlets telling everyone that he was a victim of persecution and vindictiveness of PNOY, if repeated long enough by him as well as by his equally Marxist lawyer friends, may eventually find acceptance by the people and the Senate that is looking into his contemptuous behavior but enviable lifestyle —  what with several posh properties and huge peso accounts.  Never mind his five other accounts in dollars!

His lies already netted him at least five adherents in the Senate.  He has only to make more rounds to media outlets and make himself more visible in the balcony of the Supreme Court with those rank-in-file sycophants to get 3 more Senators from the impeachment court.

He can care less about his dismal public rating, all he cares is the possibility that three more Senators may come handy and declare him innocent. As far as he is concerned, the public do not count if he can count on three more Senators!

And here is what counts:

There are three types of Senators in the Senate: 1) Those who consider CJ Corona guilty, 2). Those who consider him not guilty despite the evidence; 3) Those who keep their perceptions close to their chest and try to send mixed signals to CJ  Corona and PNOY that they have not made up their minds — and  therefore open for negotiations.  This third group is the trapos or the transactional politicians.

Three lady senators, Miriam, Pia and Legarda; Bongbong and Joker have already acquitted CJ Corona.  If Lapid votes with them, the jurist needs two more votes instead of three to get off the hook.

The politicians in the Senate are:  Senators Enrile, Honasan, Villar, Sotto, Escudero, Pimentel, Estrada, and Lacson.  Whoever gets to them first gets their votes. Or if they play hard to get, these Senators will vote congruent with the wind of public opinion.   Of these transactional politicians, though, Enrile is the most astute; he keeps sending various signals to the public, to the Supreme Court, to PNOY and to CJ Corona.  But he is handicapped by a dark martial law past; he is old and the impeachment trial offers him a last straw for his redemption and a lasting imprint in history.  He is likely to vote for conviction rather than acquittal.

Senators Honasan and Lacson are also hounded by their martial law past and later on by high profile murders, (The Olalia Murder, Kuratong Baleleng rub-out and  the Dacer-Curbito Murders), but they are still young, they could afford to be reckless again. But overall, these two will vote for conviction if there is a huge public perception that CJ Corona is guilty, or acquittal if the public mood swings the opposite direction; or either of the two positions depending who gets to them first.

Adverse opinion on CJ Corona will continue if he keeps punching in the shadows of TV cameras instead of before the Senate.

Senators Villar and Sotto are the real dark-horse of the trapos.  Sotto does not care if he votes guilty or not guilty because his favorable name-recall secures his political future. He is too arrogant of his celebrity status to care about what history would write about him.  The “masa” do not read history anyway.

Villar can vote not guilty on account of his being anti-PNOY or guilty depending on the mood of the public.

This is a big letdown to the public who already adjudged CJ Corona guilty.

Escudero and Pimentel are still young and both are lawyers. They do not have their eyes only in the Senate or higher office, but have that Freudian subconscious salivation for judicial posts. On the floor, whenever they speak, one can notice that they looked like old patrons of AT and T manipulating discreet telegrams to the Court that they have imbibed the right culture of those who seat in the Supreme Court. After all these two voted to honor the TRO of the Supreme Court preventing the IC to subpoena the dollar accounts of TJ Corona.  A judicial post is more lucrative than a Senate post if you take CJ Corona’s acquisitions as the benchmark.

Actually their attitude is like that of Pia Cayetano, though the later voted to disobey the TRO of the SC. All these three Senators are ambitious and shrewd. CJ Corona is likely to get their votes.  Or because they are young and ambitious to be future jurists, they can even vote guilty knowing only that even with their votes, CJ Corona could still be acquitted because the Senate cannot muster the magic votes of 2/3.  They get the adulation of the people who rooted for CJ Corona’s conviction, and yet rejoice at the result of his acquittal.

This is how I extrapolate the votes of these 23 Senators.

Those who will readily vote for conviction:

Likely to vote for conviction and likely to switch vote for acquittal.

Those voting for acquittal:

So the real battleground is the swing votes of 8 Senators likely to vote guilty and likely to vote not guilty.  An upside though is that six of these senators are real politicians and therefore predictable.  They will vote guilty if there is an overwhelming public opinion that CJ Corona is guilty.  Or they can be broken if “backdoor deals” factor into the process.

The public who already voted the guilt of CJ Corona need the help of Senators Honasan, Lacson, Escudero, Estrada,  Villar and Pimentel to vote for conviction.  This is real pressure at crunch time.

“A person who contemplates this endless litany of tragedy and misery would be pardoned for concluding that man is at best a selfish and aggressive animal whose predatory instincts are only partially and occasionally controlled by some combination of powerful institutions and happy accidents.  He would agree with the famous observation of Thomas Hobbes that in their natural state, men engage in a war of all against all.  In this respect, they are worse than beasts; whereas the animals of the forest desire only sufficient food and sex, humans seek not merely sufficient but abundant resources.  Men strive to outdo one another in every aspect of life, pursuing power and wealth, pride, fame, beyond any reasonable measure.”

CJ Corona typifies this modern man.  If he is not controlled by powerful institutions and happy accidents, he is a liability to the nation.

“Our public discourse has been shaped, in ways we may be only dimly aware of it, by the teachings, or the popular corruptions of the teachings, of the great thinkers of the modern age.  Charles Darwin taught us, we suppose, that a person is the isolated product of a competition for survival among selfish genes coping with material circumstances; his or her morals are entirely utilitarian and self-centered.”

“My understanding of our moral confusion is bit different from that of many others.  To some, the central problem is that modern man has lost his moral bearings or religious commitments so far that he is now governed only by immediate impulse or calculating self-interest.  Though examples of such a mentality abound, I do not think it is an accurate characterization of the general problem.  I will argue in this book that most of us have moral sense, but that some of us have tried to talk ourselves out of it.  It is as if a person born to appreciate a golden sunset or a lovely song had persuaded himself and others that a greasy smear or a clanging gong ought to be enjoyed as much as true beauty.”

According to Wilson, some modern men anchor their action on utility. Their morality is entirely an issue of convenience.  Will their actions bring economic windfall?

In other words, is there profit to be gained in the discharge of official functions?  This looks like the Megaworld case already.

Let me belabor on the issue that CJ Corona and his lawyers are card-bearing Marxists!

“Modern philosophy, with some exceptions, represents a fundamental break with tradition. For the last century or so, few of the great philosophical theories of human behavior  have accorded much weight to the possibility  that men and women are naturally endowed  with anything  remotely resembling a moral sense. Marxism as generally received (and, with some exceptions, as Marx himself wrote it) is a relentlessly materialistic doctrine in which morality, religion and philosophy have no independent meaning; they are in Marx’s words, “phantoms formed in the human brain,”  “ideological reflexes,” “sublimates of their material life-process.” To be sure, in certain places Marx wrote movingly of man’s alienation in a way that implied that in their natural state, people value ‘self-realization and uncoerced communal living,’ but he never explored in a serious way man’s moral inclinations.  Marx’s followers specially those that used his doctrine to justify their power (Lenin comes especially to mind), were alike in thinking that any means justified to achieve the communist utopia. And Marx’s own life is testimony to how little he was disposed to let moral considerations affect his political determinations of personal conduct”.  (ibid, p. 3).

10 thoughts on “CJ Corona and His Defense Team Are Marxists!”