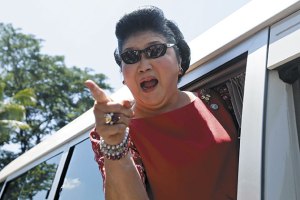 One can understand why the New York Times was bad mouthing President Benigno Simeon Aquino.  He did not bring business to New York.  The crooks did. More crooks in the mold of the Marcoses, stealing from the Filipinos and splurging those stolen millions in this sleepless city, means more  business for New York.

“One winter morning in 1988, Imelda appeared at federal court in New York to Plead innocent, swathed in an aqua-colored puff-sleeved terno more appropriate for evening wear.  Beforehand, she stopped at St. Patrick’s Cathedral on  Fifth Avenue to pray, and when she reached the court TV cameras zoomed in for close-ups of what one commentator referred to unkindly  as “crocodile tears.”  Her bail was paid by friend Doris Duke, the tobacco heiress.”

“Soon after the first edition of this book appeared, the Marcoses’ New York lawyers asked me for help.  “The book contains a number of extremely interesting revelations,” they said, “which are potentially  of considerable  significance  in connection with the pending indictment.”  If I made certain files available, they could get the indictment thrown out  by showing how American officials had encouraged Ferdinand and Imelda to misbehave  and participated in their illegal activities:  smuggling gold from the Philippines, helping sell it to the Gold Pool and the Trilateral Commission ; urging the Marcoses to invest in stolen assets in the U.S. so they could enjoy them when  they “retired”, knowing all along  that the Marcoses had set up the California Overseas Bank and other corporations to funnel the loot.  A  quid pro quo had existed between the Marcoses and Washington under the table.”  (Marcos Dynasty, Sterling Seagrave, p. 432).”

After Imelda and Adnan Khashoggi were acquitted from racketeering charges, one juror,  Thomas O’Rourke, said: ”It was on the wrong side of the ocean. It was a totally silly case. We are not big brothers to the people overseas.”

Yes of course,  American jurors must look at Imelda’s racketeering as substantial business to New York and to hell with the people overseas.