Congressman Manny Pacman Pacquiao is a very  fast learner  — he can outclass his flashing left and right hook combination on the ring with his computing speed now.  He was cranking up numbers and working overtime like an electronic calculator in undemanding ease.

The 8-title world holder can allocate P1 Million for each 114 congressmen (not 115 because he does not have to bribe himself to vote for the measure that will relieve him of his tax woes both present and future) and another P2 Million for each 13 senators, then his math will bring him a total of P140 Million financial exposure, {114 + (13 x 2 x 2) =140 }.

Pacman is being assessed somewhere around P2.2 Billion in back taxes by the government.  If he ante- up the amount of P5 Million to the proponent of the bill, Congressman Magtanggol Gunigundo, the champ risks only the amount of P144 Million from his huge fortune.  Throw way another P56 Million to the vultures and hyenas in the mainstream media and social media to drumbeat this dubious proposal with some measure of a patriotic gloss, then the total financial burden of P200 Million to Pacman is still a pittance!

Now that pork barrel has been declared unconstitutional, most congressmen must be hard put to finance a very luxurious lifestyle.  Dangling a P114 Million on their face is likely to create death due to stampede of these honorable gentlemen to vie for the first 114 quota — the way hungry wolves would stampede over rotten carcass on a barren desert.  This is one incident though where deaths could not be mourned by the public for they may actually rejoice in it!

This   payoff would still be a drop in the bucket compared to Pacman’s current estimated P2.2 Billion tax liability.  But here is the bonus:  Pacman will never see the inside of the BIR office for the rest of his life.  However the cynics might as well say:  “Why not include Aling Dionisia and Jinkee from tax exemption bill too?”

I wrote an article earlier about the similarity between Pacman and Lucio Tan.  It was a licentious comparison, but the more Pacman engages in the subtlety of backroom deals to cling to the entirety of his fortune, the more he approximates the personality of this very successful business tycoon.

Mr. Tan, once a “magbobote,” according to Imelda Marcos was assessed with huge taxes by the government years back.  To cut on his inchoate loss, he went to the Supreme Court. 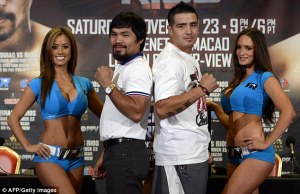 There were only 12 or 13 Justices. He needs only about 7 of them and if his tax case was assigned only to a division, he needs only 3 of them.  Lucio Tan is a Chinese and Chinese people are said to be very adept at numbers.

Pacman, like a real politician is simply doing what a politician does best  – exploit the corrupt system for personal and selfish advantage.  He learns from the best of them in Congress.  After all, the most visible among his courtier is a Governor who was once Erap’s jueteng tong collector.

Congressman Gunigundo must be choking in his sales pitch that Pacman brought honor to the country to deserve a lifetime exemption from all his earnings.  He assumes that every Filipino relishes at seeing him bashes the other fellow’s head for the money and the bestiality of the sport that butters up our repressed savagery, a very honorable calling that honors the country too!

Assuming we accept the premise that Pacman brought enough honor to the country, does not the State reciprocate it by conferring on him the title of “Pambansang Kamao?”  How about the public showers of adulation and affection on the prizefighter when he comes home from overseas boxing tour?  Is the entourage of well-wishers sharing his glory not enough compensation that he would ask the State to further his fortune by not subjecting it to tax?   Is he not honored enough when people elected him to Congress?   — or that everyone swoon at the clatter of his purse?

If these are not enough, then the video game Pacman  which name he liberally appropriates to describe his boxing prowess might as well mirror his voracity for material wealth.

What happened to the Christian concept of “wealth stewardship”  — that in the hands of the pure, those wealth are only in their  custody — the real beneficiaries are the many that are deprived thereof. After all he was a moralist who invokes the name of God flawlessly and without any trace of sacrilege tone in it!

We have not seen an atheist demand from the government that his wealth be tax-exempt, only from the ‘pious’ and God-fearing Pacman and his supporters that we see such magnitude of parsimoniousness and greed..

4 thoughts on “Congressman Gunigundo Is Harming The Country!”