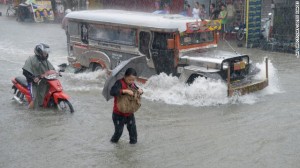 Heaven weeps uncontrollably  over the unabated corruption in Metro Manila that its tears  flooded in “biblical proportions” its major thoroughfares.

In my own sense of irony I viewed  with endless trepidation the sight of my 24 year old daughter coming home early morning from a midnight shift of 12 or sometimes 16 hours to make honest money as a hospital nurse, while one Jeannie Napoles, 23, owns a condo worth $2 million  in Los Angeles, CA, and enjoys parties, wears signature apparel and expensive jewelries courtesy of the mother who is now hiding as a fugitive for illegally detaining her relative who ratted her out for defrauding the government of “pork barrel” funds through ghost projects in the scale of P10 Billion.­

I have the same eerie discomfort over the past situation of Imee Marcos and Bongbong Marcos  who while studying abroad were provided with separate expensive condos and  $10,000 a month allowance each  excluding the salaries of their maids and security details.  Money which according to author Ricardo Manapat  (Some Are Smarter Than Others) was acquired through racketeering of their parents — while ordinary students in Metro Manila have to skip meals sometime and went to their classes hungry.

Heaven has an ironic way of sharing with our own grief because the flood affects most those who already had suffered.  But it could be its provocative challenge to the people to take a  bolder action against  the more insidious enemies of the State, the pillagers and the thieves, aka, the politicians and their obnoxious allies.

And by the way:

Those who felt nostalgic about the Marcos era being more benign compared to what comes after him should read the book, The Philippines, The Political Economy of Growth and Impoverishment in the Marcos Era (ISBN, 0-8248-1521-1, 405 pages) by James K. Boyce, associate professor of economics, University of Massachusetts. 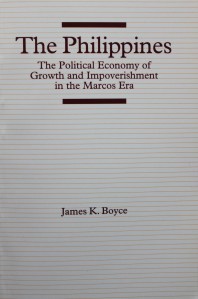 The author cited Ian Little who coined  the phrase  “immiserizing growth” to mean  a situation in which  the poor become poorer even as the income per person grows, but in a stronger casual sense to mean that growth itself  is a cause of impoverishment.

The introduction of the book says it all:

“The development policies pursued in the Philippines resulted in the impoverishment of the already poor, the plunder of the economy’ natural resources, massive foreign indebtedness by the state to finance private capital flight and an enormous enrichment of a tiny minority.  The advanced techology of a green revolution and, more generally, economic policy-making by technocrats within the authoritarian system, were supported abroad and proclaimed at home as the solution to underdevelopment.  In the event, underdevelopment was accentuated, the country was led to financial ruin and the political regime collapsed.”

And speaking of the Marcoses, here is author Manapat again:

“There were times when extremes poverty and wealth drove us into anger, frustration and despair. There were times too when it had all  a surreal effect.  There were times when our account of the properties (of the Marcoses) tempted us into incredulity and disbelief.  The accumulation of wealth went beyond ordinary human needs, and even beyond what has been normally  considered luxurious, that it acquired a perverse, unreal character.  Our consciousness became saturated at seeing accounts of so much wealth that we had  to temporarily suspend in disbelief  in order to cope with the massiveness of what confronted us.”

6 thoughts on “Heaven Weeps and The Books The Marcos Apologists Must Read!”