There are people who believed that on the tragic  day of August 21, 1983, Marcos was bedridden with failing kidneys because of lupus (or due to stressful life, not lupus  according to JPE’s Memoirs) and therefore he could not have ordered the ‘murder’ of the popular oppositionist former Senator Benigno 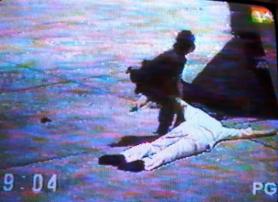 But Marcos was not always hobbled in his sick bed. Twice a week, he had his dialysis at Malacanang and therefore, he was very much in command prior to Aquino’s coming.  He could have ordered his political nemesis eliminated or had made an unofficial body language of his desire to get rid of the popular Ninoy to his underling, Gen. Fabian Ver.

“Was Ver acting under the direct orders from Marcos?  Or was the general carrying out what he thought his commander in chief wanted? Was Marcos Henry II wanting to be rid of this ‘turbulent priest’ with Aquino his St. Thomas a Becket?  There is evidence, which Ver would have been aware of, that Marcos wanted Aquino killed.  In all that has been written about the Aquino assassination, one secret remained.  In July, after Aquino had made several statements in the United States that he would return soon, Marcos asked some of his trusted research assistants to compile what they could about political assassinations.  He was most interested in knowing more about the killing of Archbishop Romero, the Salvadoran prelate who was an outspoken critic of human rights abuses and was assassinated with a single shot while saying mass in March 1980.”

“In addition, and also not publicly discussed, U.S. intelligence officials discovered that Marcos sent agents to the United States to “shadow  Aquino.”  One man with that mission was Colonel Rolando Abadilla, who had a notorious reputation as a torturer.  In July 1983, Abadilla, described by a U.S. diplomat as a high-ranking hit man,” was in the United States, ostensibly to watch his son participate in a soapbox derby.  Some U.S. officials believe that he had instructions to assassinate Aquino if the opportunity arose.”

“Abadilla’s mission and other evidence lead one diplomat, who was in a senior position in the embassy at the time of the assassination, to conclude, ‘It was Marcos. He wanted to get rid of him [Aquino]. In effect, there was a standing order to shoot on sight.  The order had gone out to take care of Aquino.  It wasn’t an order to kill him at the airport.”  The operative words may well be the last three.  Marcos wanted Aquino killed.  But he didn’t give the order to do so at the airport” (Waltzing With A Dictator, Raymond Bonner, p. 351-52).

In other words, the order was to kill Aquino discretely!

Besides, Marcos  dialysis could have been timed at Ninoy’s coming and his being heavily sedated on that day was a masterful stroke to mislead the public of his ‘participation’  in this dastard criminal act. It was a very Marcosian gamble!

U.S. Ambassador to the Philippines, Michael Armacost said about the assassination of Ninoy:

‘”It was traumatic.”  To him the assassination was “an illustration of a government out of control.”  It was not just that the government believed it could get away with the most brazen activity.”  What compounded Armacost’s reaction was that they “didn’t even care about the consequences.”  (ibid,  p. 357).

Why It Is In The Personality of Marcos To Order Ninoy’s Assassination!

Marcos was a very scheming person, ruthless and vindictive.  Mayor Arsenio Lacson of Manila who was a member of the defense team of Marcos for the murder of Congressman Julio Nalundasan believed that he killed the late congressman in 1935.

“Di puta gid, yawa.”  If that guy ever becomes President, God save the Philippines!” swore the irrepressible Lacson.

Why hijo, what has come to you?

Unmindful of Luchi’s questioning (Luchi is Lacson’s wife), Lacson continued his early morning dialogue, “That bastard is crazy, if he thinks that people have forgotten that he killed Julio Nalundasan.  I know that he did, and 10 angels and 10 fatherly Laurels telling me that Ferdinand Marcos did not do it would not change my mind.  I know it, I was part of his defense panel.”

“You mean Ferdinand Marcos has declared that he is seeking the presidency of the Philippines?   Did he say he was joking, Arsenio?  At this point, Lacson finally took notice of his wife and faced her.  “Yes, hija, that pug-nosed killer of Nalundasan had the gall to come here and proposition me into teaming up with him for a crack at the leadership of this country”.

It was on an early morning in later March 1957,  hardly had a shocked and grieving nation  buried its most beloved of all Presidents, Ramon F. Magsaysay, when Ferdinand E. Marcos paid a visit  to Lacson at the latter’s residence  on M. Earnshaw Street in Sampaloc, Manila.  Marcos then completing his second term as congressman for the second district of Ilocos Norte said he was advised by “Papa Laurel” to propose to Lacson the formation of a “dream presidential ticket” which would have the support of the politically-powerful Laurel clan.

“Yes, padre, I will subordinate myself to you.  I will be your vice presidential running mate – on condition, that you will pledge not seek reelection, if our team wins.”  Lacson quoted Marcos.

“Oh no, wait a minute Ferdinand, I really would want to serve this country as President one of these days.  But if the condition is that you will be my Vice President, forget it.  I love life, too, and I want to live a little longer, while serving my people.  Don’t ever think that I have forgotten the sharp aim of that man who felled Nalundasan with a single rifle shot.  I may hardly have the time to take my oath as President before my own Vice President guns me down with that deadly aim of yours.  Oh, no Ferdinand, forget it.”

On how Marcos staged the “ambush” of Defense Secretary Juan Ponce Enrile to give color to the deteriorating peace and order in the country,  Mijares wrote again:

“Marcos pressed a button in his intercom, and when an ever ready aide responded to say “yes, sir,” he commanded: “Get me Secretary Enrile.”  And then with his line to the communications room aide still open, Marcos muttered to himself: “Masyadong mabagal ng mga taong ‘yan Kung kailan pa naman kailangan magmadali. Within few minutes, he determined that his secretary of national defense, Juan Ponce Enrile, had left his office at Camp Emilio Aguinaldo rather early in the day.  He was located by Sgt. Arturo Boquiren, agent on duty at the communications room near the President’s Study Room, in the house of a “friend.”  Somewhat irritated, Marcos ordered Enrile in the following manner:  “Secretary Enrile?  Where are you?  You have to do it now.. ya, ya,  the one we discussed this noon. We cannot postpone it any longer.  Another day of delay may be too late.”  Continuing his orders obviously after being interrupted with some remarks by Enrile, Marcos went on:  “Make it look good. Kailangan seguro ay may masaktan o kung mayroon mapatay ay mas mabuti. (May be it would be better if somebody got hurt or killed). … O hala, sigue, Johnny and be sure the story catches the ‘Big News’ and ‘Newswatch’… and call me as soon as it is over.”  (ibid, p. 49).

That Marcos had a soft heart for innocent people being killed is not in his personality!

(Note:  Mijares was a Marcos confidant, a journalist and the President of National Press club who defected to the U.S.  and testified before the U.S. Congress in 1975 about Marcos and Imelda’s ruthlessness and corruption in the Philippines.  Copies of his book once launched in 1976, were cornered by Marcos from U.S. bookstores and burned. Only few copies survived today.)

What happened to Mijares and his family after his defection to the U.S and later  writing his book was more gruesome.

The publication of Mijares’s book Conjugal Dictatorship on April 27, 1976 arouse a firestorm of outrage at Malacanang – Mijares raked up just enough of the Dovie Beams affair, torture by Ver’s thugs, and the faking of Marcos war record to cause acute embarrassment.  But Conjugal Dictatorship was systematically plundered from every book store and public institution in the United States, including the Library of Congress. Eight months after his book vanished Mijares himself disappeared.

The last anyone heard of him was a cryptic letter, postmarked Honolulu.  He wrote to columnists Jack Anderson and Les Whitten that he was about to take off on “a daring sortie to the Philippines… For security reasons,” he cautioned, “I would request you to breathe word of this daring trip to anyone until I can call you by phone.  Or I’ll send you proof from Manila, a letter with this.”  He drew a star with a circle around it.  “Wish me luck,” he added.

Mijares phoned his wife, Manila Judge Priscilla Mijares, saying he was taking a Pan American flight to Guam. According to subsequent investigations, Mijares left in the company of Querube Makalintal, a Marcos intelligence officer posing as a revenue attaché at the Philippine Consulate in San Francisco.  Fabian Ver also was in San Francisco, had been in touch with Mijares, and was seen boarding the same Pan Am flight to Guam.

When her husband vanished, Judge Mijares began her own investigation. She determined that Ver and her husband flew to Guam, and then boarded a Philippine Air Lines flight to Manila.  Mijares and Makalintal joined Ver in the first-class section of the plane, she said.  It was only after the flight landed at Manila International Airport that her husband disappeared.  She said that NISA agents took Mijares to Ver’s headquarters at Fort Bonifacio, where he was put in a dungeon where political detainees were kept for long periods. A jailer she knew told her that he saw her husband there.

On May 1977, their sixteen-year-old son Luis ‘Boyet’ Mijares told his mother that he had received a phone call saying his father was alive and inviting the boy to come to see him.  He insisted on going.   The boy’s body was later found dumped outside Manila, his eyeballs protruding, his chest perforated with multiple stab wounds, his head bashed in, and his hands, feet and genitals mangled.  The mutilation of the body was typical of incidents where, to extract information from an uncooperative prisoner, one member of a family was grotesquely tortured in front of another.    (Marcos Dynasty, Sterling Seagrave, p. 273, 74)

In 1980, Steve Psinakis arranged to have a conversation with Imelda Marcos in New York and brought up the Mijares case.

“And speaking of killings,” said Psinakis, “tell me, Mrs. Marcos, has Mijares been killed?”

“How should I know?” said Imelda “Mijares had more enemies than you can possibly imagine.  He was the lowest kind of snake that ever lived.”  She used the past tense throughout.  “Tibo was a thief, a compulsive gambler and loser, and worst of all, a cheap extortionist.  He was not a newspaperman: he was a blackmailer.”

“If you knew all this about Mijares,” Psinakis said, “why did your husband make him his top media man as well as the official censor of the martial law regime?”  Imelda changes the subject.  (ibid, p. 275).

35 thoughts on “Why It Is Easy To Believe That Marcos Ordered Ninoy Killed!”