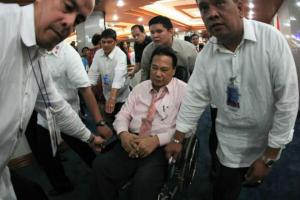 After almost 3 hours of ‘privileged speech’ CJ Corona wishes to be excused.  He does not need the permission of the presiding officer, Juan Ponce Enrile to do that, after all, he is the chief justice!

Delivering his monologue, with curt admonitions from the Presiding Officer, Corona was transported into his own world of privileged,  and as if in a trance had wished to be excused and left the witness stand he thought was his chair in the Supreme Court that he can freely abandon as the Chief Justice.

He was jolted to find Senate Guards closing the premises and surprised as well that he could not find his chamber where he regularly retires after each session of the Supreme Court. Alas, he was in another building he thought was his.

It was time to save face.  His bout with diabetes, paradoxically was at hand to excuse his impudence and his lawyer frantic over his antic, has to demure to JPE and excuse  his client’s hilarious exploit, and that his cross-examination be postponed because the chief justice is “tuliro pa.”  (confused).

His arrogance in peremptorily leaving the witness stand without being discharged and affording the prosecution to cross-examine him  was a stark contrast of his coming back to the session hall propped with a wheelchair to support his wobbly legs, stripped of his light black suit that earlier enhanced his imposing built, now he looks pale and pathetic with loose pinkish tie matching his light pink long-sleeved shirt.  Minutes earlier the public saw him combative, and then he reappeared like a wilted cabbage!

If he is sick, the public can only commiserate with his pain, after all, he has  reasons to be sick.  He is charged with betrayal of public trust and of amassing fortunes he did not declare and he faces an end game that can strip him of his privilege and a jail time next.  Any healthy individual could be withered sick!

As a  Chief Justice, however, he could not afford to be sick – the business of dispensing justice, requires a mentally robust individual  who can preside over issues of one’s liberty, his freedom, his property; the business of the nation and its sovereignty – and above all, the issue of accountability.  If ever he can still surmount the physical travail of his office, many doubt if he can overcome his ‘moral crisis.’

He can resign now to put to a stop to this ‘political bloodletting,’ but if he does not, he must be thinking for an encore of his performance, he thought he had brilliantly delivered and expect the nation and the Senate to weep with him and  give him a free passage!

Is he seeing tears now or only more condemnations? He can search the answer within himself.

By trying to leave the session hall after his long winding narrative, he wanted to pre-empt any question from the Senators and the Prosecutors. He delivered innuendoes and accusations that need to be processed through interpellations and/or cross examination and yet he thought that would demean the dignity of his office.  He hurries to leave.

Not only as a jurist, but  as a ‘primus inter pares,’ (first among equals) he being the chief justice, should know that his narration  of ‘lanterns of truth’ before the IC was unconventional, if not irregular and that to test the integrity of any  narration one  should submit for interpellations and/or cross-examination.

Cross-examination is a component of due process. Without being cross-examined, his narration becomes hearsay that can be stricken from the records.  I wish Senator Miriam Santiago can deliver her patented tirade against anyone bent on violating the rules of court!  But even her appears muted.

“When cross-examination is not and cannot be done or completed due to causes attributable to the party who offered the witness, the uncompleted testimony is thereby rendered incompetent and should be stricken from the record. (Bachrach Motor Co. vs. CIR, L-26136 Oct. 30, 1978; Ortigas vs. Lufthansa,  L-28773,  June 30, 1975)

“The principles leading to the results thus summarized must now be examined more in detail. The general principle for which the Hearsay rule stands is that no testimonial assertion is receivable, which has not been made in court under the fundamental tests or securities of oath, cross-examination, and confrontation. The requirements of the first are examined in another place; but its application does not affect our present subject, because wherever there has been cross-examination there has been an oath, and hence, if the requirement of cross-examination has been satisfied, that of the oath has also been. It remains then to inquire what sorts of testimonial assertions are receivable, not as exceptions to the Hearsay rule, but because they have satisfied the fundamental tests of truth which the Hearsay rule imposes, — cross-examination and confrontation. “(Wigmore on Law of Evidence)

CJ Corona had accused  Jose Maria Basa III, the uncle of his wife now dead of being ‘unemployed’ and a ‘spoiled brat’ who had debauched the properties of the patrimonial estate of their forebears and that his wife was actually the one that was abused.  However he would deny the prosecution to question his assertion and would want the public,  to quote his lawyer, ‘gobble it up hook line and sinker.’

He accused Ombudsman Conchita Carpio Morales of perfidy and for not having a conscience and wanted the public to ‘gobble up his assertion hook line and sinker.’

His daughter wrote a legal memorandum on why she bought the 90.7 per cent of  Basa-Guidote Stocks for P28,000 despite its corresponding real estate being paid for by the City of Manila the amount of P34.7 million and he wanted the public to ‘gobble  up his assertion hook line and sinker.’

He claimed that out of extreme parsimonious living for 40 years that he was able to amass vast fortunes and he wanted the public to ‘gobble up his assertion hook line and sinker.’

He claimed that part of his wealth was that fortune entrusted to him by his late mother so he can minister it to his siblings and he wanted the public to ‘gobble  up his assertion hook line and sinker.’

He claimed that he had engaged in currency trading since 1960, almost like that of George Soros’s fame and he wanted the public to ‘gobble up his assertion hook line and sinker.’

He claimed that his children have commingled their funds with him and he wanted the public to ‘gobble up his assertion hook line and sinker.’

He claimed that he did not steal from the government (probably true because his wealth could have come from other sources by virtue of his office) and he wanted the public to ‘gobble up his assertion hook line and sinker.’

He claimed that the auction money of P34.7 Million was with him.  But he would not want to explain why it was with him by refusing to be cross-examined.

He said he was a victim of persecution and hatred. One might actually envy his circumstance of being persecuted as long as one is awashed with wealth.  His fortunes, he would conditionally divulge,  becomes a scourge.  He wishes to cleanse a family honor with cheap rhetorics instead of dossiers to validate his claim that their wealth were proceeds of honest toils and business astuteness.

He painted himself into a corner and there is no way out except to step back and soil the grand narrative he had built.  He has to come back to the Senate.

Without going back to the Senate to complete his testimony, CJ Corona is literally digging up his own grave. But the bigger question is:

“Are the Senators capable of pushing him into that grave?”

7 thoughts on “The Chief Justice Wishes To Be Excused Hook Line And Sinker!”