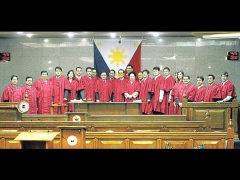 Honorable Senators sitting as impeachment court, ladies and gentlemen in the galleries, citizens of the republic and friends.

Steve Jobs, co-founder of Apple, and President of Pixar, in 2005, five years before he died said:

“Don’t be trapped with dogma,  which is living with the results of others’ thinking.  Don’t let the noise of others’ opinions drown out your inner voice!“

Today, we are at the cross road that makes  imperative that we examine the  dogmas which the firebrands conveniently stoke to hold us down in our chain and fuel our fears of anarchy if we make a  judicial official accountable for his conduct.  Let this generation confront these dogmas to find out if they hold any meaning then and now!

Accountability is what impeachment is all about.  It is a process enshrines in the constitution itself; to put to task an errant public official and strip him of the office which is temporal and to which he could not claim any birthright.

The house  had braved this old beaten path, but this time, it was successful to impeach a Chief Justice of the Supreme Court for  betrayal of public trust  in an overwhelming majority of 188 out of 285 members.  The lower house hopes that this august chamber joins it and the people in their outrage against this murkiest judicial scam that puts personal loyalty above the interest of the nation.

In the forthcoming trial, the house prosecutors will catalogue with unmistakable certainty the wrongdoings of the respondent who have failed to detach his personal as well as his wife’s relations with the former president and considered this relationship and the overflowing kindness that proceed from it as wholesome to the business of the nation rather than inimical to its best interest.

The defense, will regale us with lofty ideals like “judicial independence”, “separation of powers”, and  “checks and balance”.  The very ideals the magistrate himself have relegated at the back burner by  ingratiating himself and his wife to the previous power-broker and secure bounties from that relationship no other mortal can,  until a new regime unforgiving of his betrayal, comes to haunt him.

These very core concepts which over extend the doctrine of social contract by John Locke   and Montesquieu,  had found their home in the landmark case of Marbury v. Madison and provides sustenance to the doctrine that judicial review is the exclusive domain of the court. (Lansang V. Garcia,  44 SCRA 448; Barcelon v. Baker,  5 Phil.  807).

The essence of republicanism or democracy itself, shall reverberate in this chamber in its full splendor  — as convenient  shield of the  jurist we now seek to dethrone.

The defense will entrap us with its dogma. It will stoke our fears. It will show us our chains and beg us to wear them once again and imprison our minds as well as our  hearts that beat for the true meaning of republicanism — power belongs to the  people and not to its  temporal occupants; accountability and transparency are at the forefront of social contract, and democracy itself shall perish if we submit to the proposition that a jurist, though how unfit he is, and how treasonous his acts were, is immune from the recall of the people laid in the context of impeachment.

Where lie the principles of  “checks and balance” “equality” and “separation of power” in the order of things that accept as truth that only the court has the authority to review the business of the legislative and the executive branches while the latter two branches are powerless to review the acts of the court which even if found injudicious, would obscure them by ascribing to the process meant to hold it accountable to the public, as an affront to its integrity and independence and injurious to the institution that acts as the guardian of the liberty of the people?  Where is the logic behind these dogmas?

But the defense will insist that we should honor these political philosophies and the exclusivity of the doctrine that only the court can say what the law is. It  would blur the finer nuance of the landmark of case of Marbury, that did not remove from the President, who took an oath to defend and enforce the constitution, his assumed authority that he can interpret it and say that it was the court that perverted it.

Or the principle in the constitution that allows Congress to impeach a jurist and for the Senate to decree a conviction for culpable violation of the constitution, if these  two collegial bodies  are wanting in authority to interpret the constitution?

In the meantime, constitutional scholars had wrangled with this landmark case and its subsequent enlargement (Cooper v. Aaron, 358 U.S. 1, 18) that made the court rather than a co-equal, superior than the others.

“The legal precedent for judicial review, that unique American doctrine that permits the Supreme Court to declare acts of Congress and the executive unconstitutional, trace to the holding in Mabury v. Madison.  Marshall  did not say that the authority  to interpret the Constitution rested exclusively with the Court, and he certainly did not endorse the grandiose schemes that envisaged the Supreme Court as a board or review sitting in judgment  on each act of Congress to determine its constitutionality.  He simply stated that the Constitution was law, and that as a judicial matter, it could be interpreted by the Court in cases that came before it.” (John Marshall, The Definer of a Nation, p.  324).

The defense will put hurdles into our path and even misread their own dogma to mislead the people and shut off their inner voice that yearns for transparency and accountability.

The court’s concept of “independence” is untrammeled discharge of its duties outside the review of the sovereign people as laid out in the constitution.  Thomas Jefferson abhors this submission.

“The Constitution, on this hypothesis, is a mere thing of wax in the hands of the judiciary, which they may twist and shape into any form they may please. It should be remembered, as an axiom of eternal truth in politics, that whatever power in any government is independent, is absolute also; in theory only, at first, while the spirit of the people is up, but in practice, as fast as that relaxes. Independence can be trusted nowhere but with the people in mass.”

At the end of the day, the members of this august chamber as the undisputed voice of the sovereign people shall provide expression of their yearning to return the power back to them and unseat this pretender to the judicial throne.

Thank you and may God Bless Us All!