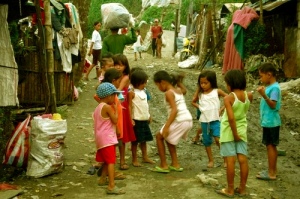 The country was poor during the Spanish colonial years; during the Japanese war; immediately thereafter;  and years after she has achieved independence from the Americans in 1946.  The recorded population of the country in 1941 was 17 million and it did not balloon to a staggering 98 million until 2010. It is a myth to say that our runaway population growth was the reason why we are poor. We have always been poor when only few people inhabited these 7,100 islands and there is no evidence that the poor, miserable as they may be,  caused the nation any misery.

And the reason why we are poor after the foreigners have left, because we remain the colony of our own elite and we have a damaged culture (source: James Fallow) and we have lost our ethical moorings. We condone cronyism and corruption and we don’t ostracize or punish the crooks in the government. Both cronyism and corruption are wasteful but we allow their practice because our loyalty is to family or friend, not to the larger good.  Our nationalism is inward-looking; we protect inefficient industries and monopolies; we did not pursue land reform like Japan and Taiwan. Land reform releases the energies of the landlords who before the land reform merely waited for the harvest. They become entrepreneurs, the harbingers of change.  We are poor because we are lazy and we are great show-offs. (source: F. Sionil Jose, Termites in the Sala, Heroes in the Attic).

The recent controversy over the RHB centers on the poor producing more poor children that causes the economy to stagnate.  But this alone is not the main reason why the country is poor.  It was because, as outlined above by Mr. Fallow and Mr. Jose.

The RHB is pro-trapos and pro rich. Population control was mandated as one of the U.N.’s  Millennium Development Goals for 2015 to end poverty.  The country will be assured of funding assistance from the U.N. if the country adheres to a program to halt her population growth.  There is lobby money too from pharmaceuticals to pass this bill.

These U.N. funds can go to pockets of our corrupt bureaucrats, the lobby money where else, but  to their other pockets.

There is no question that more poor children  put so much stress on our resources, which by the way should be preserved only for those who can afford them, the rich.   But it is the poor though that most of the time bear the burden of hard labor.  They work in the bowels of the city’s sweat shops and are paid pittance for their toil.  Their paycheck only sustains them to the next paycheck and there is nothing left for the education and clothing for their children.

The poor also work in the countryside as farmers but their produce are cornered by the cartels who advanced their farm inputs prior to harvest.  Or if a past bad weather devastated an otherwise productive harvest, the next cropping yield is already mortgaged as a security for the prior debts from these cartels which advanced usurious money for farm inputs.

Where the many poor tried to improve themselves by getting out from this  economic bondage by working abroad  as   maids, welders, electricians, masons and clerks, seamen, and yes sometimes as prostitutes,  they uplift not only their immediate families but the crocodiles in the bureaucracy and the elite that controlled various business conglomerates in the country.  Their collective remittance for 2009 of P763.3 billion which represents a third of this year’s annual government budget of P1.5 trillion inspires international confidence over the country’s fiscal soundness and it has a direct impact on big retailers that thrive from these new consumers, the kinfolks of the OFW’s.

But observe how our self-righteous politicians who pillaged our treasury and farm out government contracts to their cronies and friends preached in their ivory towers about the need of sustainable population growth in line with our economic growth. They constitute a perennial charge to our treasury, but they have the impudence to blame it on the poor why the country is miserable.

Celestino Miglore, Observer for the Holy See, said that, when the Cairo Conference was held in 1994, many States believed that a population explosion would occur and hamper their ability to achieve adequate global economic development.  That perception had turned out to be unfounded and, in many developed countries, population demographics had declined so steeply that some national legislators were encouraging an increase in birth rates to assure continued economic growth.

At the same time, he continued, development was occurring at previously unachieved rates in many developing countries and the greatest threat to growth stemmed from irresponsible world and local economic management, not a population explosion.  For nearly a century, attempts had been made to link global population with the food, energy, natural resources and environment crises.  Yet human ingenuity and the ability of people to work together showed that people were the world’s greatest resources. ( International Conference on Population Development, ICPD,  64th UN Assembly Oct. 13, 2009).

Miglore had simply reechoed the position of Julian L. Simon who said that:

“Population growth ultimately creates more resources. The basic argument echoes the overarching thesis: as resources become more scarce, the price rises, creating an incentive to adapt. The more a society has to invent and to innovate, ceteris paribus, the society will raise its living standards and lower resource scarcity. People, on average, add to a civilization more than they take away. People are the ultimate resource.”

Yes, our population is our greatest and ultimate resource. The poor have already proven that they can be productive too.   They have toiled endlessly in the dehumanizing sweat shops and other debasing economic endeavor in order to survive. Why can’t the government harness the  full potential of our poor people and use the money for RBH to offer  our high school graduates crash courses  on carpentry, maidservants, welding, masonry,  seamanship, accounting  and other courses that are in demand in other countries?

This could be our solution to our poverty, in adition to breaking up our corrupt crony capitalism, restore our ethical mooring and sweep the termites from our salas,  and replace them with our heroes which we had long consigned into our attic.

2 thoughts on “RHB, The Rich’s Perpetual Swindle Against the Poor!”