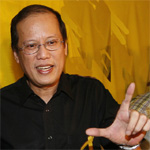 GreatRealPhilippines,  is a blog of one who uses the penname Benign0. He is also a regular contributor of Filipino Voices, another Filipino dominated blog.  Benign0 has a favorite punch-line which is full of wisdom and grit: “We expect so much from our leaders and nothing from ourselves”.

Election 2010 is scheduled this May.  The contenders are mostly clowns but the people look at them as a parade of statesmen vying for the most important position of the land, the Office of the President.

We are told that we must vote wisely this time around, otherwise we are doomed.  Pundits differ on their take of who should be our President as if this choice spells the difference between our survival and misfortune. It does not because for long we had been doomed.

To get out of this hell-hole, we must depend only in ourselves and not from our politicians who find convenience in mouthing empty platitudes of their being pro-poor and pro-economic growth.  We can only be as good or as rotten as our politicians.

But are we capable of finding ourselves and be better than our politicians?

To begin with, we are no longer outraged by a candidate who as a chairman of the Senate Committee on Finance in 2004 lobbied before the Department of Public Works to divert the original C-5 project so the roads can traverse his empire of subdivisions, was paid partial amount for the “right–of-way” but later on had the nerve to complain that he has yet to receive the full payment for the realty the government had taken in building these roads over his properties.

It is an insult to the intelligence of the Filipinos, but we did not feel the insult, or we simply lost our capacity to be enraged and would rather comfort ourselves with the insult.

In the pack of Presidentiables,  we have Noynoy, a scion of Cory and Ninoy,  Mr. Teodoro, a GMA surrogate, Erap, an alcoholic and a gambler, Mr. Gordon, a serious politician but already out of contention and so were Mr. Perlas, Mr. De los Reyes, Ms. Madrigal and Bro. Villanueva.

Rooting for those who are already out of contention is pure lunacy.  It’s a waste of one’s precious vote. But no, we would rather be lunatics.  If we are lunatics why do we aspire for a good government lead by “angels”. Should not our leaders be lunatics too?

As the election nears, the choice is narrowed down between Noynoy and Mr. Villar.  If Mr. Villar got his number up in the latest survey, credit that to Revillame and Dolphy’s endorsements.  Again, it speaks volumes of our mass hypnosis to celebrity appeal.  Their endorsement is like a magic wand that can denature the most obnoxious candidate in the pack.  If we are that gullible why expect our leaders to treat us as if we are intelligent creatures?

If we vote for Noynoy we feel that we are honoring Cory and Ninoy. What’s wrong with that?  No. We need a savior and not a weakling incompetent?  Who in the pack has the “halo savior” glistening in his head with a strong vision and character?  No one!

But why still go to the polls to vote? No, we should not vote at all unless we are clear in our position.

My position is clear, to vote for Noynoy and to urge others to vote for him or for Mr. Villar only.  These two candidates could be clowns, but Noynoy is the kind of a clown who goes to children’s party to make them laugh. Mr. Villar is another clown of “joker’s” type in the movie “Batman”, rapacious, ruthless and vicious in pillaging and poaching the system.

But people should vote only for either of them. If we have a majority President, it makes us less divided. Maybe we can do a little step one at a time and find our bearing as a Republic and not as a nation of marauding  warlords and thieves.

Let us put some sense in us before we expect it from our leaders, or shall we say, from our clowns!